Get tasty recipes with organized grocery lists each week 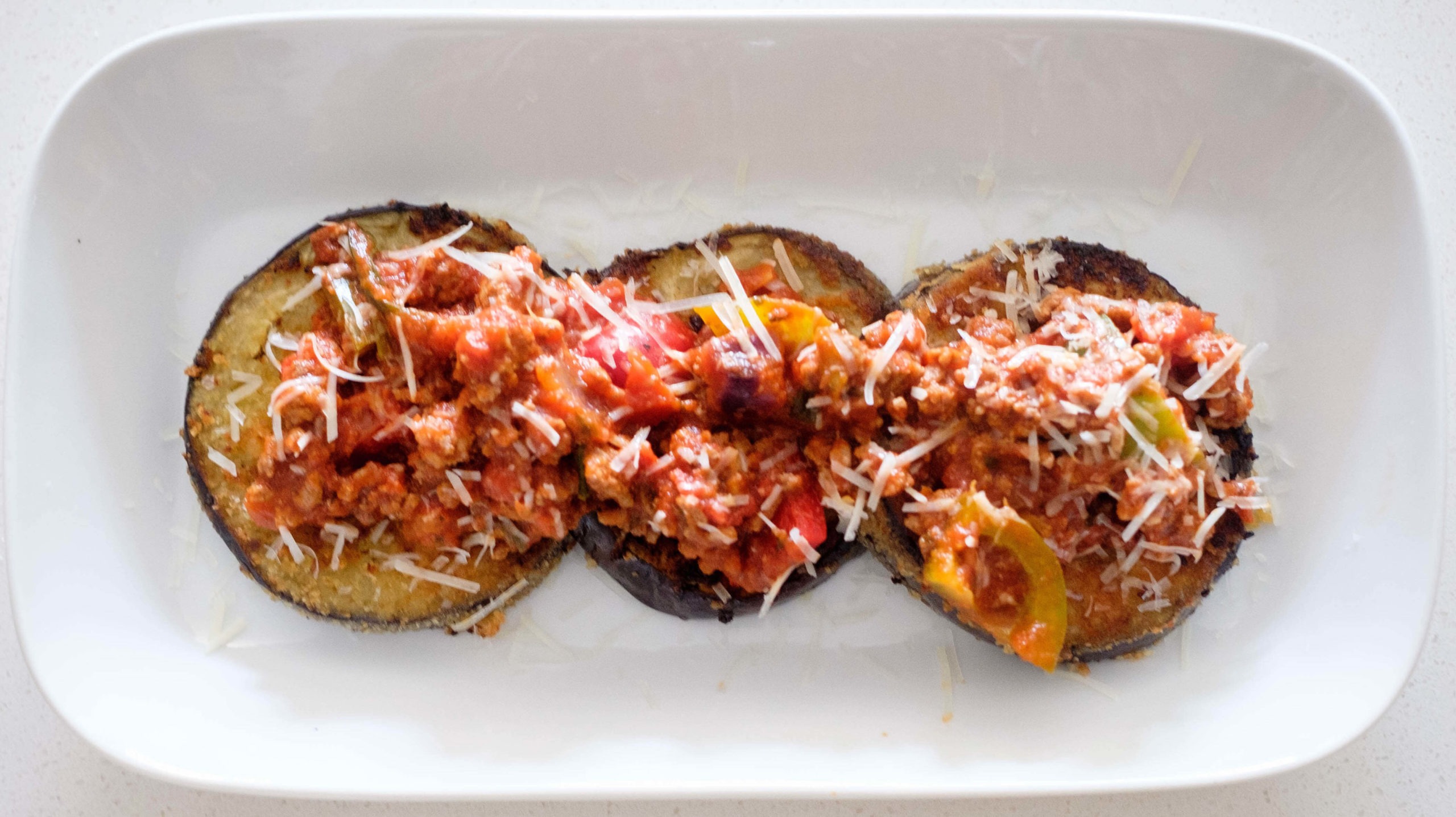 Pan-fried eggplant with meat sauce is a delicious and healthy option if you’re craving the heartiness of an Italian meat but looking to reduce the carbs you would normally find with pasta as the main ingredient. The fried eggplant slices come to a golden crisp and are topped with our homemade sauce and of course, some cheese.

Eggplant has many fantastic benefits like increasing brain function, preventing anemia, helping with digestion and improving heart health. It’s high fiber content can lead the way to reducing the cholesterol in your system by binding it to the bile in your digestive system and removing it naturally.

Preparing Your Eggplant for Cooking

Before you begin your cooking process, you’ll want to remove the stem, leaves and the top and bottom of the plant. You can leave the skin on or remove it, that’s totally up to you. For this recipe it is important to salt the eggplant. Salt helps bring out the extra moisture that can provide a mushy and soggy result when cooked. Slice your eggplant into circles and salt both sides, letting it sit on a kitchen towel or paper towel  for at least twenty minutes.

Historically, eggplant was actually salted before cooking to reduce some of the bitter flavor that came with the plant. However, the eggplants we have now have mostly bred out the bitterness.

What are the Different Types of Eggplant

There are countless varieties of eggplant that can vary widely in shape, size and even color. Most common at American grocery stores, is you guessed it, the American eggplant. This eggplant is also known as the globe eggplant and has a tougher, meatier texture than other eggplants.

Some other varieties of eggplant:

Graffiti Eggplant – Slightly sweeter than the traditional eggplant, the graffiti eggplant is most recognizable by its purple and white striped skin. Which is why it is also known as striped eggplants.  This variation is great for eating pureeing, eating whole or substituting in for traditional eggplant if you need.

Japanese Eggplant – Both the Japanese and Chinese eggplants vary from traditional varieties in their long, oblong shape. The Japanese variation of eggplant is deep in it’s purple color and has a creamy flesh that works great in stir frys.

Fairy Tale Eggplant – Similar in color to the graffiti eggplant, the purple and white striped fairy tale eggplant is small and can fit in the palm of your hand. Due to the tender nature of this variety, it is wonderful for grilling.

White Eggplant – There isn’t a lot of difference between the classic American eggplant or  “Globe Eggplant” other than the color that the plant is wrapped in. Both the  white and American eggplant have a  smooth creamy skin and meaty flesh. These are great for both bread and protein substitutes.

Little Green Eggplant – A fantastic eggplant for baking, the little green eggplant, is a bright green variety of this “fruit” and is most known for being mild and sweet in flavor.

Thai Eggplant – Thai eggplant is round, small in size, and traditionally hard to find. These miniature eggplants are typically a greenish-white color with a light pink flesh. Most notably, Thai eggplant is more bitter than other varieties, to remove some of the bitterness you can try removing the seeds. If you’re able to score some at your local market, try throwing a few in our recipe for Thai Red Beef Curry.

There are countless other varieties and heirloom versions of each that are available to eggplant lovers across the world. Try experimenting with the various types when you’re making something new and see which you like best!

What is the best time of year for eggplant?

Eggplant is available year-round but it’s peak season runs from July to October.

How to store eggplant?

Eggplants can’t withstand temperatures below 45 degrees Fahrenheit so storing in the refrigerator can sometimes be counterproductive. If you choose to do so, store it in the vegetable drawer or the warmest part of your fridge. Eggplants can also be kept out of the fridge, which may actually help increase their lifespan. Store in an area that is cool and away from direct sunlight.

How to choose an eggplant?

Due to the fact that there are many varieties of eggplants and each is slightly different, a general rule of thumb is to look for a firm, shiny skin. Avoid eggplants that have started to wrinkle or have soft, brown spots on their skin.  Eggplants should feel heavy and not hollow.

Is eggplant a fruit or vegetable?

Most people are under the assumption that eggplants are vegetables, but in fact they are fruits!

Do I need to peel eggplant before cooking?

Nope! The skin on eggplant is entirely edible and removing it is more of a preference of the person eating it. 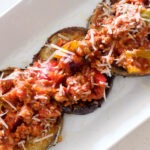 Optional: Top it off with shredded parmesan cheese

Links to other recipes:

Want to get a whole week’s worth of healthy meals planned for you? Sign up for our membership and get full meal planS with step by step instructions to get you prepped and ready for the week